Thousands of light years away, in a galaxy far from earth, lies a world dominated by monster truck battles. Brutal contests of speed, skill and strength have left only the fiercest competitors standing and ready to take part in the MONSTER SMASH-UP final.

Now it’s your turn to take control of your favourite Monster Smash-Ups driver to race, smash, eject and rebuild these incredible monster trucks.

The super suspension makes these monster trucks incredibly fun to tilt-turn, race and swerve. You can even activate the ejector seat and send your driver flying across the room, by crashing the monster truck’s front bumper! And the building block design allows you to crash, rebuild and race again. The 2.4g RC technology and USB recharge capability makes Monster Smash-Ups the ultimate in radio controlled fun. Choose from three intergalactic monster characters – Vicious Viper, Raging Raptor and Rowdy Rhino.

Rowdy Rhino from the planet of Maximus. He prides himself on being the most powerful and brave monster truck driver! 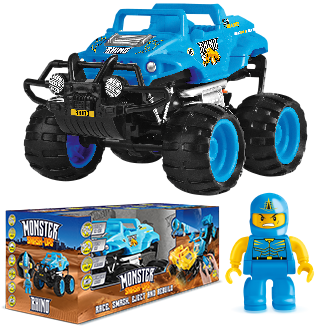 The vicious Viper comes from the planet of Venemo. He is a master of cunning and skill, always ready to strike with no mercy! 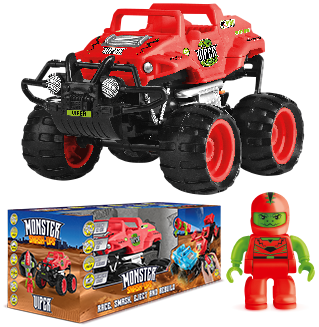 The raging Raptor comes from the planet of Pangaea. He specialises in speed and agility to race away from his enemies! 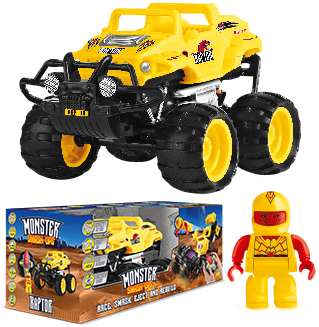 Black Widow comes from the planet of Arachnia. She specialises in speed and cunning to ensnare her enemies! 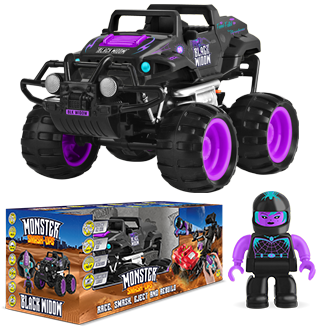 If you have a query about our Monster Smash-Ups™ products please get in contact with us using the enquiry form below. Alternatively you can email us at sales@monstersmashups.com or call our aftersales support team on 0845 576 9869, Mon-Fri (9am-5pm) excl. public holidays.